India’s tour of Australia has not been great for the team as more than half of the squad has been out with injuries. With almost 4-5 players ruled out of the series because of Injuries, heading into the 4th test at Gabba from 15.01.2021 there are a couple of more persons who got ruled out i.e Ravindra Jadeja and Hanuma Vihari.

India vs Australia is not missing on giving the fans what they deserve. It has been a great tour down under in terms of performance. Coming to this article for the 4th test match between INDvsAUS, the odds are from funbet sports. The bookie has one of the best online betting apps in India, check it out on our special funbet app page. 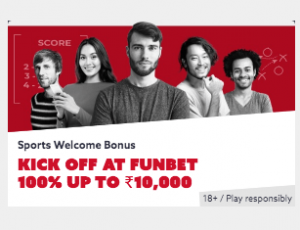 India will dearly miss many experienced players because of injuries before the 4th test. T Natarajan and Washington Sundar may make the test debuts too. The Indian team might look like the India A team given the no. of test debuts over this test series. It will be interesting to see the leftie, T Natarajan, at the fast-paced Gabba pitch. T Natarajan, N Saini, and Mohammed Siraj might take the burden of Pace bowling on their shoulders. With Washington Sundar chipping in we can have the dependable spinner like Ashwin and he can bat like the former player too.

Note: To Claim the funbet bonus, all you need to be is 18 years or above and complete the KYC verification too. Once you are done with that, you will be able to do Funbet login and the first deposit bonus.

Our Word: Toss is Crucial on Day 1

Whoever wins the Toss might win the day according to us, Australians love playing at Gabba. The result is in favor of them 9 out of 10 times. Marcus Harris replacing Will Pucovski will be a blessing in disguise. No Jasprit Bumrah might be a chance for a lot of Aussie players to play with more free shots. We might see a couple of more debuts too. Team India would still love it if Jasprit Bumrah and Hanuma Vihari take their chances and play this test.

There might be more chances for team India to win this test match. Coming to the other players, so the emphasis on the big score will be now on guys like Shubman Gill, Rohit Sharma, Cheteshwar Pujara, and the skipper Ajinkya Rahane. The pressure will be more on the openers to give them a steady partnership of at least 100 in both innings. Openers are key for the win in this test match for India and the Baggy Green guys. Good luck with your 100th test Lyon.